The Case is a  solo-rpg journaling game, where the player takes on the role of a Detective investing a mysterious death.  As the story progresses, strange events intrude on the Detective's life, causing them to gradually lose themselves to horror.

Using a deck of cards, a stack of sticky-notes and a notebook and pen, you will play through a series of prompts.

The Case is a 24 page PDF.  Full colour, basic and digital versions are provided.

The Case is a horror story which uses Lovecraftian themes.  From the outset it involves references to violence and murder, grief and loss, self harm and addiction,  loss of control and loss of identity.  Please do not read or play The Case if these themes could cause you upset or harm.  The Case is intended for adults only.

The Case was created for the itch.io #CosmicHorrorJam and is heavily inspired by the far superior Thousand Year Old Vampire by Tim Hutchings and The Wretched by Chris Bissette, both of which you should play if you enjoy horror games.

Support this game at or above a special price point to receive something exclusive.

Community copies are free to anyone who wants to experience The Case but is unable to pay.

A community copy will be added each time a copy is purchased.

any chance of a community copy

I started playing the game, and I have a few more questions regarding the prompts:

Thank you again for such a great game!

Hello. "Create an event" and "add an event" are the same thing.  I used two different terms, which was a silly thing to do.

Events must be placed in a memory. Memories can only hold a maximum number of events, and there's a maximum number of memories you can have.  If you're told to create an event and there's no space to put it, you have to lose a whole memory. (So the character is forgetting things that used to be important as new things happen, and this is gradually changing who they are).

if a prompt doesn't tell you to create (or add) an event, then don't. You can still consider what happened with that prompt, but it's not a new thing to take up space in a memory.

Glad you've been enjoying the game.

Thank you for the reply!

I'm a little confused by the "Moving through prompts"...

On step 3, it says: "Deal a card from the suit deck. Read and respond to the associated prompt. If the card is the King, ignore it another card instead."

On step 6, it also says to ignore the King: "Discard two cards from the suit deck. If either of these cards are the King, return the King to the suit deck and discard another card instead."

At the end of the page, it says: "Playing the King as one of the four prompt cards indicates that this part of the story is over. Put the suit deck aside and start with the next suit."

Do I have to ignore the King or put the suit deck aside when it comes to play? It's not clear to me...

Thank you for the game!

So, Kings indicate that you're to move to the next chapter of the story.

At the start, draw four cards so you get four prompts.  We don't want chapters to be super-short, so if any of these four cards are Kings put them back in the deck and draw another card instead.

If you're drawing cards for prompts at any other time, drawing a King means the chapter ends.

Between rounds, we're also going to discard a couple of cards.  This will take them out of play, so they don;t come up as prompts.  Make sure, though, that you're not discarding Kings,  otherwise you won't be able to draw them as prompts.

That makes perfect sense to me now.

Thank you for the reply!

I don't really think that "don't be racist" should be a controversial comment, but thanks for your input.

Lovecraft was a serious bigot. His racism wasn't incidental, it was a major part of who he was and the stories he told.  When we use Lovecraft as an inspiration but fail to address his behaviours as a person, that acts as a tacit endorsement of his racism.  It empowers those who still share his views.

It's that simple.  If you're not interest in the game, move on.

Well stated.  I am a fan of the fiction of H.P. Lovecraft but not his racial opinions.  They are laid bare in his works.  In this case I can love the art and not the artist, but it's not easy... 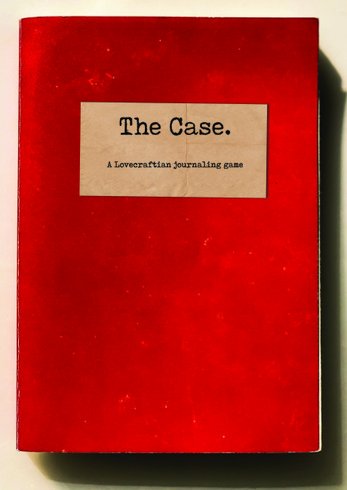